In Lodz Symphony black is a frame, a real shot, like in New York Portrait: Chapter II. The cuts are not given to black fades. They are not even real cuts or breaks, but black shots that interrupt the succession of plans – almost quasi-still. Inserts and transitions, like the 'white spaces' of haiku, invites you to pause, meditate, demanding more of your attention. It is not Guy Debord's black, not even Stan Brakhage's or Aldo Tambellini's. They are shaded and framed - chiaroscurate - by a dark interior, where the Bolex is located, and by an exterior brightness like that of a John Ford’s shot. The deserted avenues animated by men at work and perpendicularly crossed by a tram - like a cargo that traverses the sea. The trunks, chimneys and frontal shots return to Ozu.

Study of a River returns to the fade in black and the Hudson River. The river and its environment seen at the rising of the light - as if it was the dawn of the world. A vision of quiet gaze, like the one that opens a famous film of John Ford. A vision of another world between the snowy shore and the water, the ship and the trees, ice sheets and tree-lined avenues and the reflections of hills in the river.  The reflected light in a puddle creates unexpected water plays that opens a graphic 'window', almost like that of a Piet Mondrian’s Composition 10 (1915) but moving and liberated from the geometric dictation, confirming Hutton’s taste for a certain 'graphism' reminding us of Richter, Duchamp and of the water plays by some pioneers of the American experimental film: H20 (1929) by Ralph Steiner and The Cartomancienne (1932) by Jerome Hill.

The tableaux of Skagafjördur that just moves like water, are still separated by black shots, emphasising their duration and consistency, if nothing else, underscores their autonomy freed from any narrative impositions. The image is the event. Initial access to the truth opens in the creeks, from the sun shining through the mist. The time is making itself in the folds of the calm sea. A display of light and shadow, movements of water and air forming clouds. It is the same mixture that takes all the diverse forms. Ample small drops of dense water, tiny suspended ice crystals, whose thickness, though transparent, covers the sight of the sky as an obstacle to that sharp vision, increasing the concentration, waiting for the veil of clouds to pass away. The light passes, and the passing testifies its singularity, its being, which in itself is already universal.​* 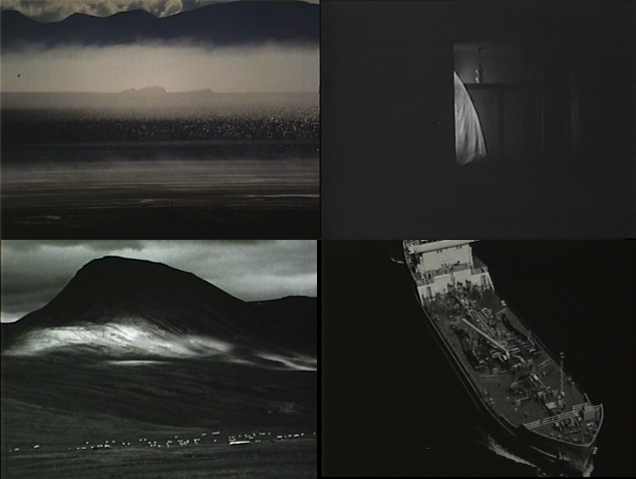 Charter of Cinematographic Projection in the 21st Century

Boston Fire is a voyage into the tension between the elements dramatising the 'picture'. The elements are, first of all, fire, water and wind, but also includes the lines and the vapour masses. The fire jets of fire fighters engaged in extinguishing the fire, design an abstract and dramatic composition - on one hand a play between the elements, and then again between white and black. But even in the 'abstract' Boston Fire the presence of the human appears - the faces almost burst into the camera. A formal exercise, the staging of the formal game of relations, especially in the finale, takes shape through the content of the human gestures that compares itself with the elements.

New York Portrait: Chapter II is more luminous than Chapter I but the transitions are black shots, not fades. The naturalisation of a violent urban scenario - the post-Future Shock, the collapse along the threshold that divides Fordism and Post-Fordism, passes through lyricism, Hutton's lyrical poems - the lyric of which is always an expression of nature. The deep chiaroscuro contrast catalyses and enhances all the other contrasts between concrete and common objects (urban furniture) and the more abstract ones such as the clouds and the vortex of water intensify their meaning and resonate with them. There is some recourse to the vague, the indefinite atmosphere, and the music for the eyes, but still Chapter II is more austere and bold than Chapter I.

On the Hudson River, In Titan's Goblet is an imaginary journey and a tribute to Thomas Cole, who at the age of eighteen moved to the United States to paint landscapes ('Hudson River School'). Hutton had to meet Cole, who was inspired by classic models, but preferred the direct contact with nature and loved architecture. Nature and human space are developed through the dialectic of darkness and light: the light of the origins – the Genesis, through the vapours emanating from the Earth, in the nebulae that envelop a surreal earth. It is an accumulation of light shapes, a stack of dreams. In this film, the protagonist is not the water, nor the city, nor the sky, but the nebulous formed from condensed and sublimated vapour, the cloudy sky. It is a world of silence – silent immensity that is poetic - flowing from a profound vision that enters a lost and reborn paradise. It is the world of clouds, in which forms and movements coexist, as a changing universe. It was Hutton's desire to see the paradise and see with his own eyes. This is a sign of heaven - the cloud - that does not betray us.

Time and Tide is Hutton's first encounter with colour, but it opens with a long quote of a Biograph film dedicated to the Hudson River, made by the pioneering cinematographer Billy Bitzer - the 1903 Down the Hudson. Tables of ice drifts; the ship opens up the ice, but nature strives to repair its torn fabric, after the ship passes. Hutton goes up and down the river, from left to right and from right to left, through the ‘camera-boat’ and the ‘camera-porthole’. The Statue of Liberty is an ambiguous, indefinite, rainy image that only delivers the silhouette of its self. The Empire State Building stands out on a uniform sky that cannot be black or starry because of the thousand lights of the Big Apple - the same ones that adorn the George Washington Bridge, a bright bracelet linking Manhattan to New Jersey. Immediately after, the Bolex seems almost attracted to the gravitation of the vegetation, far from New York, into a massive rocky mountain excavated by a road, but still persists despite the changes. The row of factories and quarries, next to each other - an industrial landscape  - seems to refer to Charles Sheeler. 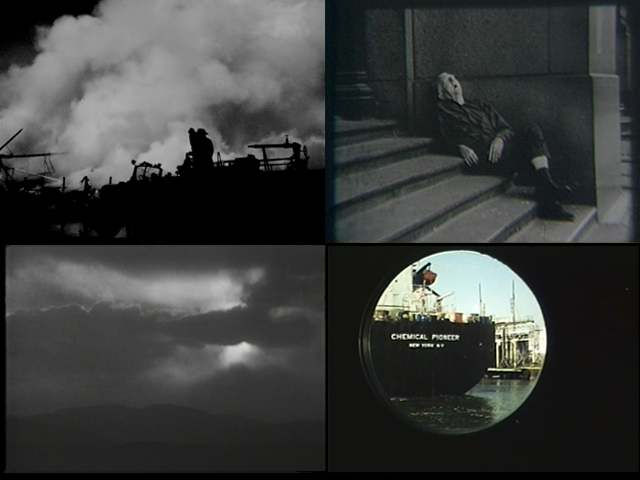 Peter Hutton - who disappeared exactly a year ago - compared to most people, did not perceive through a lexicon, he did not see concepts, or invent landscapes; they were the fruits of his intellect and abstractions. Modulations, slight shifts of brightness, water splashing, do not touch or alter the beautiful postcard views. They are only ideas, and ghosts. Hutton, as well as being one of the most important experimental filmmakers of the last fifty years, was a sailor and, as he himself said, the life of a sailor does not depend on what they think but from what they see. The sea teaches you to see, to exercise patience.

Hutton's cinema inscribes itself within a certain mode / tendency of the American experimental film – a mode of building the duration of the film and the film itself - reminding us of Andrew Noren, Larry Gottheim, Nathaniel Dorsky and James Benning. In a sense, the beauty of this kind of film is in its slowness, in the exercise of patience. They are impressionist, contemplative and experiential films.

Hutton’s landscapes are accessible as a sort of expectation to listen to them, calling out for an answer, corresponding to the observer who, in turn, is an incarnate of a finished space - a fragment of that finished space.

Peter Hutton has traveled around the world, has made many movie-travels, and from early on. He was a merchant sailor, like Conrad and Jack Kerouac, like his father. Ever since he was little he dreamt of visiting the Pacific, the Orient, and he did. He has shown how he lived - even himself, his family and his home - recorded in his very own travel diaries, in which form and content are both identical. One of the first stages of his travels was in San Francisco - the city of the Canyon Cinema of Bruce Baillie, the city of poetry; of Robert Duncan and the Beat; the city where Sidney Peterson and James Broughton shot one of the first avant-garde films in America; the city which was the theatre of one of the sixth-century subterranean masterpieces - The Flower Thief (1963) by Ron Rice - and where visionary filmmakers Jordan Belson and Larry Jordan lived.

Hutton has traveled in the Californian valleys (July '71, 1971), along the icy rivers or in the old European capitals (Florence, 1975), in the far East (Thailand, China, Bangladesh) or in the 'generic city' par excellence (New York Portrait I, II, III, 1979, 1981, 1990), but his travel images are always adventures and discoveries of everyday life.

Hutton's cinema is a voyage that aspires to new images, even when they have been there for millennia. A mobility of images: travel and cinema. An imaginary trip. The eye is mobile, but if there was no movement, the eye would not be mobile. The eye sees, because there is something to see - and imagine. Quietly.

Hutton's documentary radicalises the profound vocation of cinema. Time is in Hutton's eye; that perception - as Merleau-Ponty taught, and Brakhage - is already a language. A documentary is time told and his films are travel diaries, which means not only monstration, but also narration, even sui generis. Because beyond an author's choice and his awareness, beyond his poetry, his films are structurally settled into the system of the tale. Hence, I insist on talking about the travel diaries.

Hutton's documentaries articulate time. In his tale time is organised and at the same time the temporal experience makes the narrative meaningful, the travel journal that, finally, sparks of a meaning accomplished only when it meets the spectator's experience. His travel diaries are experiences that are not just representations. They are the song of the world - the echo of the whole world's emotion, a musical exercise, mousike (the art of the Muse), which witnesses the destruction and the tragedy yet, aspires to the beauty of the world and perhaps even its possible regeneration. From here, the sense of Peace that his films still leave us in the audience, to which the possibility of traveling through the music of his images, is always open.

Rattis Books and Close-Up Cinema pay tribute to the visionary artist Peter Hutton, one year on from his passing. Presenting the first substantial screening of Hutton’s works in London in a decade, this two-night programme, introduced by writer, critic & curator Ed Halter, focuses on a cross-section of the film-maker’s intimate and lush portraits of urban, rural and marine environments. ​

We are pleased to publish this celebratory note especially sent to us for the occasion by Toni D’Angela, a close friend of Peter Hutton and author of the upcoming bilingual book L'OCCHIO E IL MONDO: Il cinema di Peter Hutton.